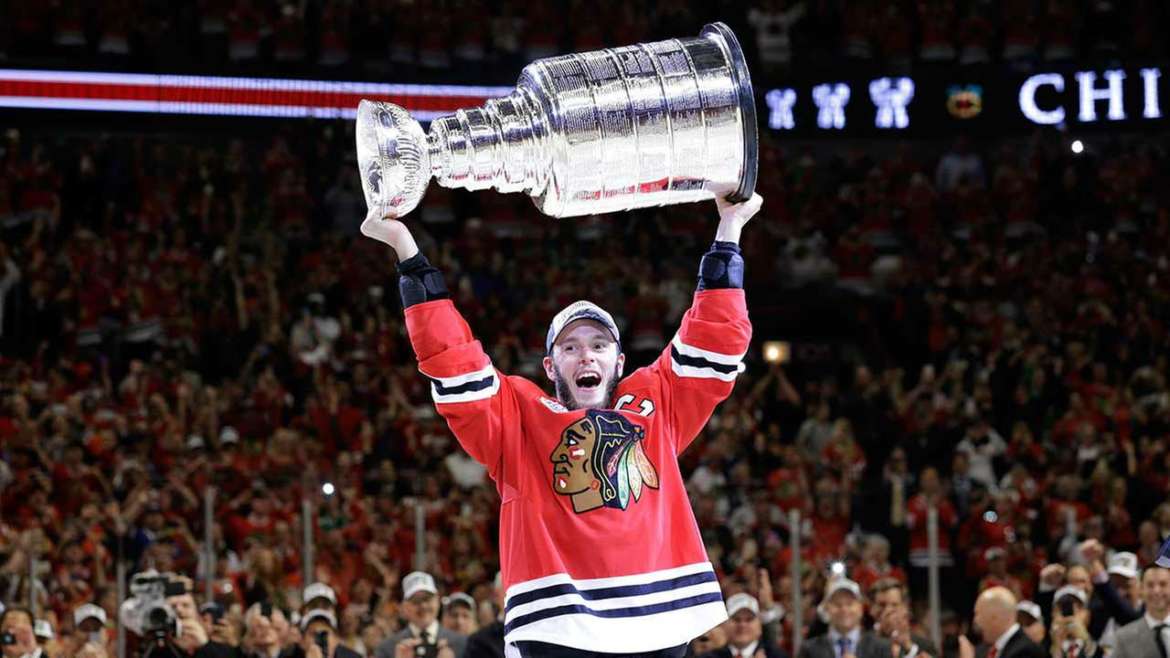 The Chicago Blackhawks Will Win the Stanley Cup – Here’s Why

Even though the Blackhawks have taken three of the past six Stanley Cups, the salary cap era has made back-to-back championships an afterthought in today’s world.

The NHL hasn’t seen a repeat champion since the Red Wings accomplished the feat in 1998 – almost 20 years ago.

Last offseason, the Blackhawks unloaded Patrick Sharp, Brandon Saad, Johnny Oduya, Brad Richards, and Antoine Vermette, among others. The losses were supposed to hamper them for the upcoming year, leaving little doubt that they’d experience a drop off in talent.

Yet here we are. The Playoffs are back, and the Hawks look poised and ready to strike once again. The Chicago Blackhawks WILL win the Stanley Cup. Here’s why the rest of the NHL will fall prey to the red sweaters once again.

Patrick Kane and Artemi Panarin found instant chemistry since the beginning of the season, and despite a short slump in the dog days of the regular season, the two seemed to ignite the fire once again to conclude what looks to be an award-winning season for the two of them. Artem Anisimov provides the physical, front-net presence to wreak even more havoc on goalies.

Some have it; some don’t. Quite a few teams around the NHL have been known for producing incredible regular seasons only to crumble under the weight of high expectations year after year.

The Blackhawks (and to a degree, the Kings) have bucked this trend completely. While they typically perform well in the regular season, they never seem to peak there. Last year’s Blackhawks team lost four straight games going into the playoffs, and we all know what happened after that.

If there are any questions about this team’s roster, they’re sure to come from the defense. Duncan Keith, Brent Seabrook, and Niklas Hjalmarsson have proven beyond any doubt that they play tremendous minutes while excelling at an elite level, but the team’s other defensemen aren’t close to that level – at least not yet in some cases.

Still, Trevor van Riemsdyk has shown that he can fit in nicely at the fourth spot. While he isn’t going to carry a team on his back, he can make quick reads on both offense and defense. Michal Rozsival is getting up there in age, but what he makes up for in lost athleticism and speed, he makes up for in decision making. Erik Gustafsson has shown flashes as well, and he even supplanted TVR as the team’s 3rd defenseman (with Duncan Keith out) for a short time.

Before a rumored concussion or case of vertigo sidelined him for double-digit games down the stretch, Corey Crawford had solidified himself as one of the NHL’s best goaltenders, with a lock as a Vezina finalist. Despite his absence, Crawford led the NHL in shutouts.

His consistency was even more impressive, as Crow seemed to give the Hawks a chance to win every game despite the team allowing more shots than they took over the course of the season.

With the Hawks on the brink in last year’s Game 5 of the Western Conference Finals against the Anaheim Ducks, Jonathan Toews scored two goals in 72 seconds to force OT, fueling an improbable comeback that had the entire arena in disbelief. Fast-forward two games, where the Captain took it upon himself to almost single-handedly dismantle the Ducks in Game 7 of the same series, striking early and often.
To be certain, it goes far beyond just last year. But when your Captain comes to you and tells you before the game that, “Everything [you’re] touching tonight is turning into goals,’” you’re not going to let him down now, are you?