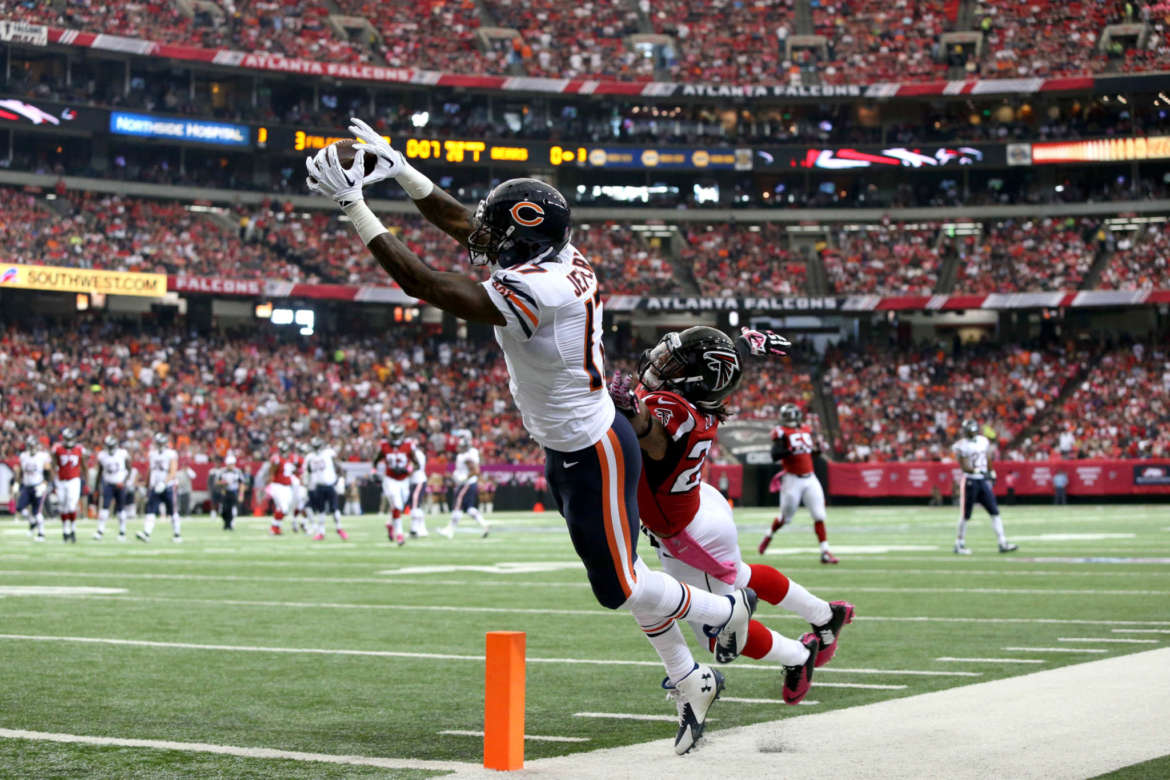 With Marc Trestman and Phil Emery sent packing behind last season’s disappointing record, the Bears organization was embarrassed, and rightly so. 2015 marks the beginning of the John Fox era, and for many fans, it’s about time the Bears hired a proven coach with a track record of success to stand in as their lead man.

The offense returns most of its playmakers, but there are offensive line concerns. Brandon Marshall’s production will be missed, but the play calling should be more balanced to offset his departure. Kevin White could turn some heads.

The switch to a 3-4 defense will be a bumpy one, but it’s hard to go backwards from last year. Vic Fangio is a defensive genius, though there are quite a few depth/personnel concerns.

Ahh, good ol’ Smokin’ Jay Cutler, the city’s most polarizing figure. Might as well get this one out of the way first. Jay is Jay. Jay was Jay six years ago, and (spoiler) he’s going to be Jay this year too. The storylines behind his rocket arm and overwhelming potential have been beaten into the ground, and frankly so has his reputation, whether the disapproval has been deserving or not. Oftentimes, Cutler is criticized for things that are beyond his control, though one thing is certain: he’s careless with the ball. It’s maddening. He should benefit from more balanced play calling this year… I think.

Matt Forte is about as rock solid as it gets in the RB position. The guy can catch, block, break one outside, and run between the tackles (even though some people think he can’t). The only question here is age. Forte is 29 this year, and though he’s shown no signs of slowing down, this is right around the age that running backs begin to hit a wall. It remains to be seen if Forte can keep it up, but if he’s still there at number 5 in my fantasy draft, I’m picking him without a second thought. That says just about all you need to know.

Behind Forte is newcomer Jeremy Langford and last year’s pick Ka’Deem Carey. These two figure to battle it out for the second spot, and whichever wins is sure to see around 20-30% of the carries in this year’s offense. Since Carey was a selection of the old regime, our pick is Langford.

Count me among the surprisingly few people who are sad to see Marshall go. I’m sure his volatile attitude and outspoken personality had more than a bit to do with his departure, but the guy was a model for consistent greatness at the WR position. Alshon Jeffery will take his place as the clear-cut numero uno, and he should be more than adequate there. If I’m a betting man, I’m banking on a career year from the young WR.

Kevin White will have some growing pains, especially because his hairline shin fracture has set him back quite a bit already. Eddie Royal might be the best slot receiver the Bears have ever had. Seriously. Even if this guy catches 60 balls, it would be a huge upgrade from the position last year. Marquess Wilson as a 4th wideout isn’t a terrible thing either.

Martellus Bennett was an absolutely monster in 2014. This guy was one of the few who actually seemed to bring their all to every single game, and if anyone deserves a new contract, it’s him. Expect another huge year from the tight end. His numbers will probably decline since the Bears won’t be as pass-happy, but he’s a lock for the top 10 and probably top 5 at his position.

Let’s start with the good news, Kyle Long is a stud at right guard. He could probably be a stud at tackle too, and we may end up seeing him make a position change this year. For now though, he’s a damn good guard.

Will Montgomery should be an upgrade from an aging Roberto Garza, and his familiarity with John Fox and OC Adam Gase should be helpful in getting off to a great start. Matt Slauson isn’t bad, and he should hold on to his starting spot.

The tackle spots are a question mark, as Jonathan Mills and Jermon Bushrod need to be better if they’re going to remain starters. Second year man Michael Ola could slide in to take Long’s place at guard while he moves outside to snag one of those spots.

Ray McDonald was a completely disastrous signing, and his absence will be felt along the line. Lamarr Houston is coming off an ACL injury after a disappointing initial season with the Bears. The hope is that he can solidify one of the outside spots and rotate in all over the rest of the line. Rookie nose tackle Eddie Goldman out of Florida State will be the man in the middle. He could make a decent impact as a rookie, though he’ll probably just show flashes as he adjusts to the speed of the NFL. His back up will be Ego Ferguson, who should continue to develop into a solid run stopper. In the mix for the opposite end spot is free agent Jarvis Jenkins and Jeremiah Ratliff (if he can remain healthy). Ratliff hasn’t been bad when he’s played, but injury concerns and age seem to be catching up to him.

Pernell McPhee is the only proven above average member of this group, and he should continue to produce at a high level. It will be interesting to see how Willie Young and Jared Allen adjust to the 3-4 scheme. The hope is that these two will thrive, though it seems more likely that they’ll struggle playing a new position. This is a shame in Young’s case, since he was one of the few bright spots last year. Expect them to excel at pass rushing but lack in coverage, as any converted 4-3 DE’s would.

The Shea McClellin experiment will continue on the inside, but at this point we’ve probably seen his ceiling (sadly). Who knows though, maybe he’ll shock the football world. Christian Jones will most likely take up the other inside spot, and the undrafted rookie from last year is my dark horse candidate to surprise some people. The safe bet is that these two have a rough time, but it’s hard to say exactly how they’ll adjust to the scheme. Neither of them are really built to play inside backer in a 3-4 scheme, but Jones has an unstoppable motor (is that a hemi?) and he plays with an edge. Jon Bostic will most likely start the year as a backup. He’s had trouble in coverage, but he probably won’t be much of a downgrade from McClellin and could end up starting.

The Bears porous secondary from last year looks to actually be a strength this time around. I fully expect Kyle Fuller to make a substantial jump towards becoming an elite corner. He was lights out at the beginning of last year before injuries caught up to him. Tim Jennings should bounce back. When you have 0 interceptions, there’s no place to go but up, and he’s proven to be a ball hawk in the past. Newcomer Tracy Porter should be a solid upgrade at nickelback.

At the safety position, Antrell Rolle provides veteran leadership and coverage skills that Chris Conte couldn’t hope to match. Ryan Mundy is coming off a career year, and there’s no reason to think he won’t keep it up now that he has a better player lining up next to him.

John Fox’s attitude strikes me as an obvious upgrade from Marc Trestman’s laissez-faire demeanor. Jay Cutler has already stated that practicing under John Fox is like “coming to work” and that can only be a good thing. Fox has experience, he’s won, and he holds players accountable. You can bet we’ll see a much more disciplined team this year.

The rest of the staff has been filled in quite nicely, with the renowned Vic Fangio taking over on defense. This is a godsend, and it should be exactly what the Bears defense needed. The transition to the 3-4 will be difficult, and they don’t necessarily have all the personnel to expect a seamless transition but Fangio will make the most of what they have. This guy is good.

Some concern comes to mind when you consider that Gase had Peyton Manning throwing the ball in his offense last year, but this should be thrown by the wayside. Yes, Peyton called a ton of plays at the line of scrimmage, he always will. But Gase was the one who drew up the playbook to begin with, utilizing the strengths and speed of his receiving corps. He did a hell of a job, and it’s exciting to see what he’ll be able to do with Forte and the other offensive playmakers at his disposal.

I’m going with a bullish 8-8 for this season. 6-10 or 7-9 are probably more realistic, but I can’t see the offense continuing to struggle like they did with more balanced play calling. The defense really has nowhere to go but up, but the adjustment to the 3-4 scheme is sure to be a bumpy one. I see improved years individually for Kyle Fuller, Tim Jennings, Lamarr Houston, Jared Allen, Jay Cutler (really though, balanced play calling will help… right?), and (my dark horse pick) Christian Jones.