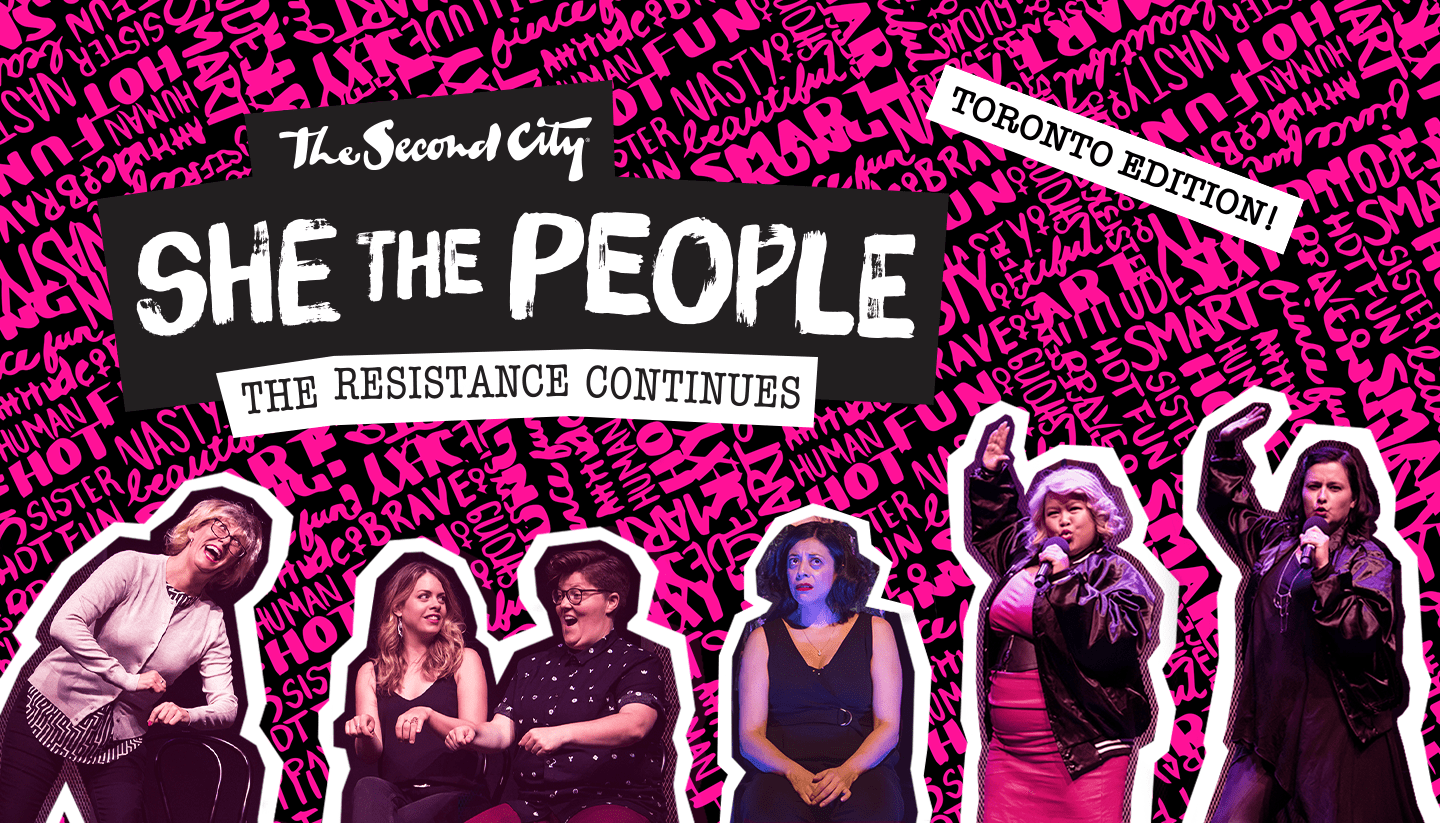 After two critically-acclaimed runs of She The People — the biting sketch revue created, performed, and directed by the women of The Second City — Toronto’s legendary comedy theatre is proud to announce its sequel: She The People: The Resistance Continues. The same fearless cast and the same memorable characters, yet 100-percent new material. The production kicked off at the Second City Mainstage on May 4th and continues as a limited engagement each Friday, Saturday, and Sunday throughout the spring and summer.

Director Carly Heffernan was part of the original Second City Chicago production of She The People. A co-writer and star of She The People beyond her directorial work, Heffernan has also earned tremendous acclaim for her work on the television series Second Jen, which was nominated for an Academy of Canadian Cinema & Television award. I had the pleasure of doing Q&A with Ms. Heffernan about She The People and, just as importantly, the city of Chicago.

How long has She The People been in the works for?

Carly Heffernan: Yes! I love starting with math! We started workshopping the original Chicago version of She The People in June of 2017 and opened that Fall.

Are there any major differences between the show’s Chicago and Toronto productions?

Carly Heffernan: Absolutely. The tone, energy, and essence of both shows are the same but only about half of the actual written material. Certain scenes get “Canadianized” to speak more clearly to our unique experiences and opinions as Canadians. Also, certain scenes are brought in specifically to explore the unique POV and/or talents of individual cast members.

When in life did you first become familiar with Second City?

Carly Heffernan: When I was in university, I tried to do a theatre project on Second City but the producer never got back to me!

Pardon the cliché, but who is on your Mount Rushmore when it comes to Second City?

Do you get to Chicago much these days? Any favorite restaurants over there?

Carly Heffernan: Since I’m living my best life, I get a deep dish pizza from a different place every time I’m in Chicago. So far my faves are Lou Malnati’s, Giordano’s, and Pequod’s.

She The People aside, what are you currently working on?

Carly Heffernan: Like every single other comedian in the world, I have a couple TV shows in development.

Second Jen was critically-acclaimed, as nominated for an Academy of Canadian Cinema & Television award. Did that nomination in any way change your life?

Carly Heffernan: It definitely opened more doors to me in the TV and film world. I really am lucky that my first experience as a show-runner was so joyful and fulfilling.

Carly Heffernan: I would spend all day, every day hugging my dog; that’s the dream. I also have a real thing for art galleries, television intended for teenagers, and any store that sells 40-dollar candles.

Finally, Carly, any last words for the kids?

Carly Heffernan: Go see She The People! It’s a hilarious, cathartic release that empowers both the voices on the stage and the voices in the audience. Let’s be real, it’s the show we need right now.

SHE THE PEOPLE!Extended thru Sept 2nd!Tix: http://bit.ly/2xT62vVPRESS•"One of the funniest revues Second City has produced in the past 20 years" – CATEY SULLIVAN•“HIGHLY RECOMMENDED” – Chicago Sun-Times•"Empowering entertainment" – CHRIS JONES, Chicago Tribune•"Second City at its creative and performing best"- DAN ZEFF – 4 STARS, Chicagoland Theatre Reviews•"She the People is the show we need right now"- ANNE RACKOWIECKI, Buzz NewsWe’ll bet you 72 cents on the dollar (or much, much less!) you’ll cheer for this sketch show entirely created, designed, and performed by the fearlessly funny women of The Second City! This mimosa-and-madness-fueled foray roasts the patriarchy, taking on everything from having it all…to having that sick feeling your government is trying to send you back to the Middle Ages. It’s time for women everywhere to collectively reclaim comedy!Cast: Alex Bellisle, Carisa Barreca, Katie Caussin, Emma Pope, Kimberly Michelle Vaughn, and Kaye WinksWritten by Carisa Barreca, Alex Bellisle, Marla Caceres, Katie Caussin, Carly Heffernan, Maria Randazzo, Rashawn Nadine Scott, Tien Tran, Kimberly Michelle Vaughn, and Lauren Walker.Director: Carly HeffernanMusical Director: Mary MahoneyGroups of 16 or more can contact our Group Sales Department for more information on rates and catering options. Phone: 312-337-3992 E-mail: groups@secondcity.com