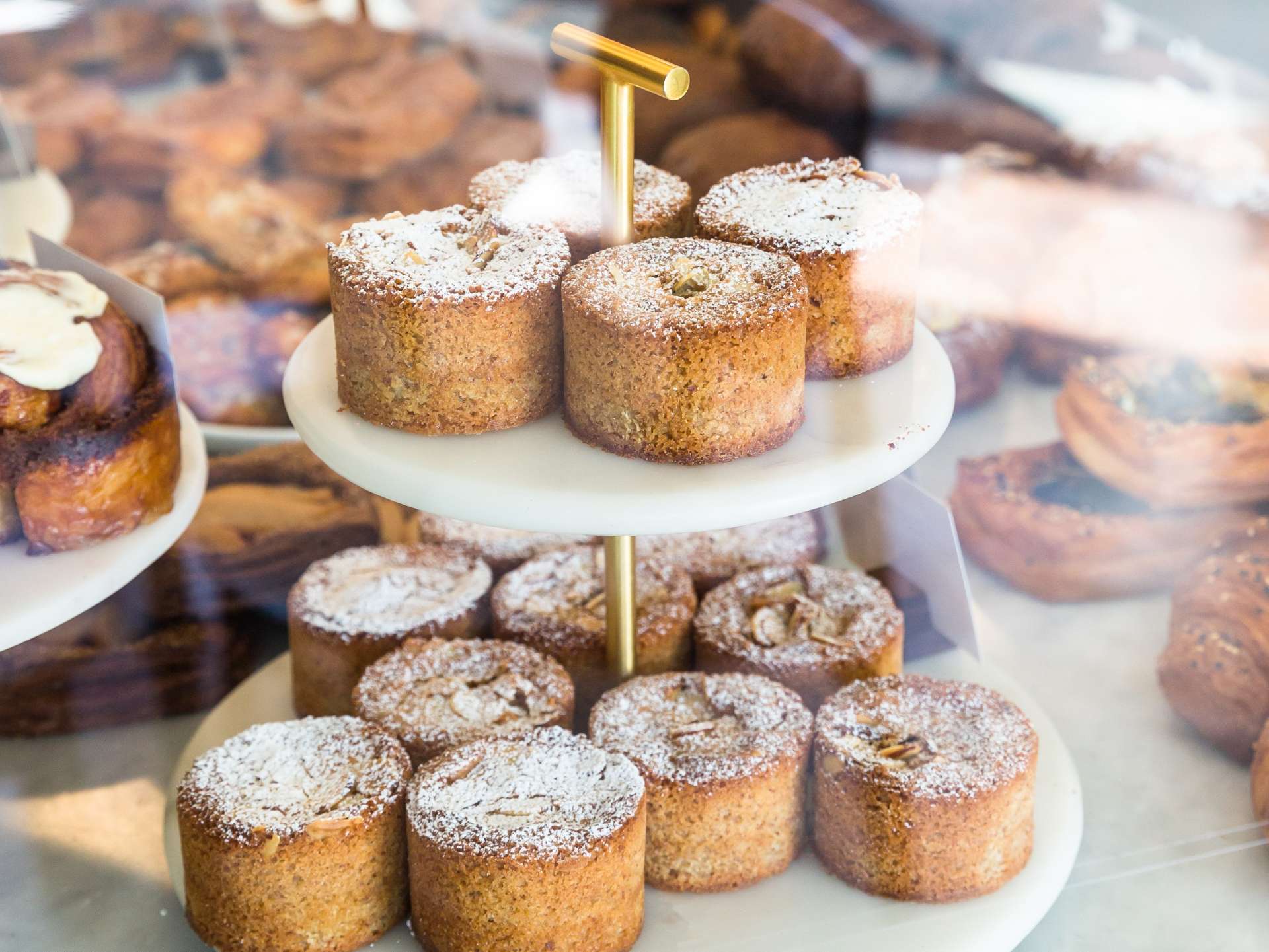 Got a sweet tooth? We’ve got you covered with this list of the best bakeries in Chicago. From conchas and croissants to cookies and cakes, Chicago is home to all types of bakeries for sweet seekers. Start your day off right with a cup of coffee or tea to accompany these delicious confections. Check out our bakery guide below!

Also, remember to pair your pastry with a divine cup of hot chocolate this month for National Hot Chocolate Day!

Bittersweet is a true European-style bakery that has served the Lakeview neighborhood since 1992 with a recent expansion to Time Out Market. Stop by for pastries, pies, tarts, brownies, French macarons, cookies, and more. There’s also a small, thoughtfully curated gift section in the Lakeview location for last minute gifting or celebratory additions like cards and candles. In addition, this bakery in Chicago is known for its custom wedding and celebration cakes, having created cakes for Oprah, Michael Jordan, and the Cubs.

The Goddess and Grocer

The Goddess and Grocer has been a popular Chicago spot for baked goods, lunch, drinks, and groceries since its first location opened in 2005 in Bucktown. Since then, the gourmet deli concept has expanded to four additional locations as well as opening several Goddess and the Baker cafes as well.

One of the most popular items to order is the Rainbow Cake. Cakes and cupcakes are also available to order on Goldbelly with nationwide shipping.

Aya Pastry brings a creative take on signature bread and pastries from the culinary expertise of James Beard-nominated pastry chef Aya Fukai. Previously the head pastry chef at Maple & Ash, Aya opened the bakery in West Town in 2019, and has since been adored as one of the best bakeries in Chicago. From Asian-inspired flavors and treats to classic flaky croissants and bread, Aya has delicious treats for any craving. The bakery recently won the “Best New Baked Good Empire” title for the 2021 Eater Awards.

Tous les Jours is a South Korean bakery franchise with more than 1,650 stores worldwide, including two in Chicago––Chinatown and Wicker Park––and five in the burbs. You’ll get more than your usual bakery fare here, though the chain has those classics too.

The bakery specializes in French-Asian-inspired baked goods, including bread, pastries, cakes, desserts, and beverages. Try the Ube Latte and Taro Cream Bread if you’re jumping into the ube trend or the Red Bean Bread for a classic Asian bun.

In 2010, Hendrickx brought Belgian baked treats and light fare to Chicago’s Gold Coast. Belgian Chef Renaud Hendrickx and his team use artisanal Belgian methods to craft fresh bread and pastries from scratch. If you are looking for the best bakery in Chicago, this destination has 13 different croissants, artisanal breads, macarons, pastries, and Belgian chocolates. Also on the menu are sandwiches, soups, and salads for something more savory.

Panaderia Nuevo Leon is a traditional self-serve Mexican bakery that has been in the Pilsen community since 1973. The bakery serves conchas, gorditas dulces, cakes, donuts, muffins, brownies, empanadas, and more. Conchas are made fresh daily with high quality ingredients throughout the day. Vegan selections are available as well.

You can also find fresh and made-from-scratch flour tortillas in flavors such as mole, habanero, chile morita, black bean with jalapeño, and more.

Jennivee’s Bakery is a cozy patisserie specializing in traditional American and Filipino cakes and pastries. The LGBTQ+ owned and operated bakery is a local favorite in East Lakeview. It’s also one of the few bakeries that are open late! The bakery serves cakes by the slice and as a whole, including custom cakes. The ube cake is one of the most popular flavors––you’ve probably seen it on Instagram! You’ll also find cupcakes, cookies, brownies, bars, and other delectable pastries.

This small bakery in Ravenswood is our new favorite lately! From ambience to pastry to simple meals offered on the menu, Sweet Moon is what we’ve always dreamed a neighborhood bakery to look like. And, just like in old times, they don’t use a website for orders. If you want to get your hands on their delicious bites, you’ll have to give them a call at (347) 985-5821!