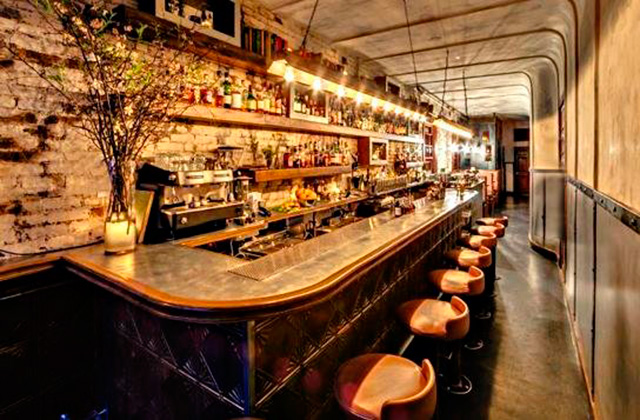 We’ll let the folks of Dead Rabbit do the talking on this one: “Come for the drinks, stay for the drinks. They really are the best.”

What You’re Drinking: The Shark Eye – passion fruit, lemon, maraschino, dry curaçao, bourbon, rye and tiki bitters, whatever those are.

Though truthfully more restaurant than bar, Mother of Pearl has made a name for itself in serving some of the wackiest themed drinks out there.

A swanky classic hidden away in NYC’s West Village, Employees Only is the speakeasy you NEEEED to find.

It’s Pianos. What more do you want me to say?

A not-so-secret, secret bar in Noho, Angel’s Share is a gorgeous, low-lit watering hole you’ll need to see to believe.

What You’re Drinking: Anything, everything, all of it.

The bar inside of the NoMad hotel is, in a word, STUN-NING.

What You’re Drinking: A Cabin in the Woods – Hendricks gin, Blackberry, balsamic vinegar, lemon and honey

A New York classic with amazing views of the city, what could be better?

A brick-lined speakeasy giving off seriously sexy vibes, Patent Pending is date worthy for sure.

You’re gonna just have to see it for yourself, trust us.

One of the oldest (and probably most haunted) bars in the city, the Ear Inn is a must for every New Yorker.

Chances are you’ve already been to Union Pool (maybe one time too many, in fact) but there’s no denying this hipster watering hole is well deserving of a bucket list spot.

It’s just a classic, what else do you need to know?

New to the New York bar scene, BlackTail was one of the best little spots to hit the city last year. Get there now before the whole word finds out.

It’s a sake bar. Ya know you love a good sake bar.