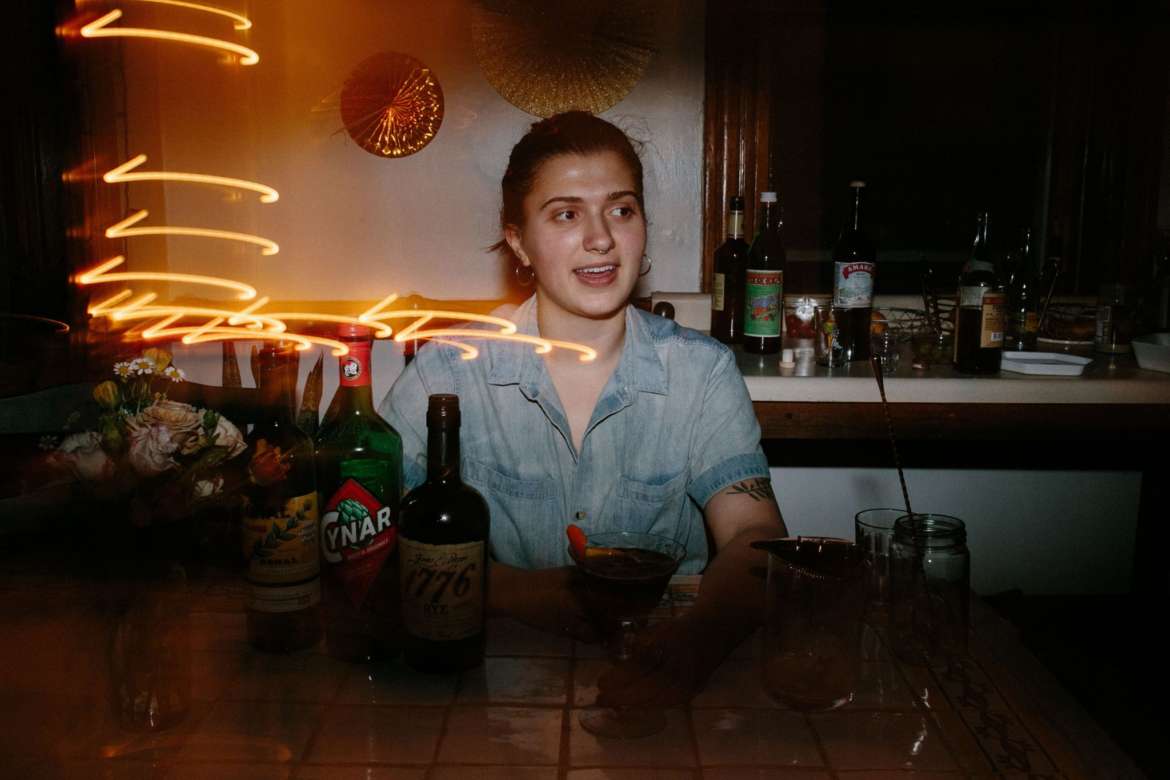 Ranked as Time Out Chicago’s 2016 “Bar of the Year,” one of GQ’s “5 Best Cocktail Bars in America” and Conde Nast Traveler’s “2017 10 Best Bars in Chicago,” The Whistler is a Logan Square favorite. Beyond its reputation as a craft cocktail lounge, The Whistler is also a live music venue and an art gallery with an in-house record label. Opened in 2008, The Whistler regularly rotates its cocktail menu, which calls for some top-tier bartending.

New to the Whistler team — joining co-owners Billy Helmkamp and Rob Brenner — is head bartender Marina Holter. She was Director of Food at local cafe Ipsento before joining the team at Logan Square’s Table, Donkey and Stick for her first foray behind the bar. After this, Holter wound up at the former upscale Southern restaurant in Bucktown known as Dixie, before becoming part of The Waydown‘s team in 2017. As the rooftop bar atop The Ace Hotel in Chicago’s West Loop, The Waydown saw Holter train under Caitlin Laman, who was Food & Wine’s “Best New Mixologist 2014” and the national Speed Rack champion of 2014.

I did a Q&A with Marina Holter about her past, present, and future as a bartender. More about The Whistler can be found on their website.

How did you become a bartender?

Marina Holter: I was a regular at one of my favorite spots in the city, Table, Donkey, and Stick. I was there at least once a week and found myself one day explaining to the bartender how I was feeling stuck and unhappy at my current job, to which she chimed in, “You already know all the drinks and we need a bartender… why don’t you work here?” I had my stage the next day and found myself in my first bartending job.

And how did you wind up bartending at The Whistler?

Marina Holter: Before this, I was at Waydown, the rooftop bar that’s part of the Ace Hotel. I loved working there and it was my first time working a high-volume bar. I eventually came to a point where I knew I wanted to pursue working in a smaller and intentional space. I planned on taking a few months off to be able to find the right fit. I mentioned to a friend how the only place I knew I would want to work at is The Whistler. They then informed me that there was a lead bartender position available there. I sent over a resume the next day and was behind the bar a week later.

Do you have a favorite cocktail on the Whistler menu?

Marina Holter: “Clear The Air” is something I would instantly chug. I’m a sucker for quaffable, vermouth-forward crushers and it’s definitely that. I also enjoy boozy stirred drinks, so “Nothing Too Serious” is a new drink that I’m looking forward to enjoying.

Can you tell me about the most recent cocktail you developed there?

Marina Holter: “Sorry I Called” is a play on kitschy cocktail culture and was birthed out of my desire to put a tasty blue drink on the menu. I started out with creme de violette which gives the drink its bright hue. Naturally, the violette played well with Letherbee gin and orange liqueur. From there, I just decided to make it a garden party and throw in some celery, lemon, and salt.

What do you wish more people knew about life behind the bar?

Marina Holter: How much the people behind the bar care about giving you a good experience. In a city like Chicago, we are super-fortunate to have so many industry individuals who look at this job as a career. At the end of the day, I do this because I love meeting people in an environment that is conducive to making people feel comfortable while engaging culture, history, and flavor.

What do you enjoy most about your job?

Marina Holter: The reason I love bartending so much is that it’s a fast-paced job that covers culture, flavor, efficiency, all while being the soundboard to many guests who may just need a friendly face to make them a drink. It’s making sure anybody can walk into our space and feel welcomed.

Marina Holter: I love going to The Art Institute, rock-climbing, and generally, I’m a sucker for a cheap flight. If I have a couple of days off in a row and can coordinate something, I’m probably hopping on a plane.

Marina Holter: I saw Mick Jenkins last week at Thalia Hall. He is one of my favorite artists and has influenced me immensely.

Marina Holter: Work hard for what you love! I wouldn’t be where I’m at now in the short amount of time that I’ve been bartending without my intense work ethic.