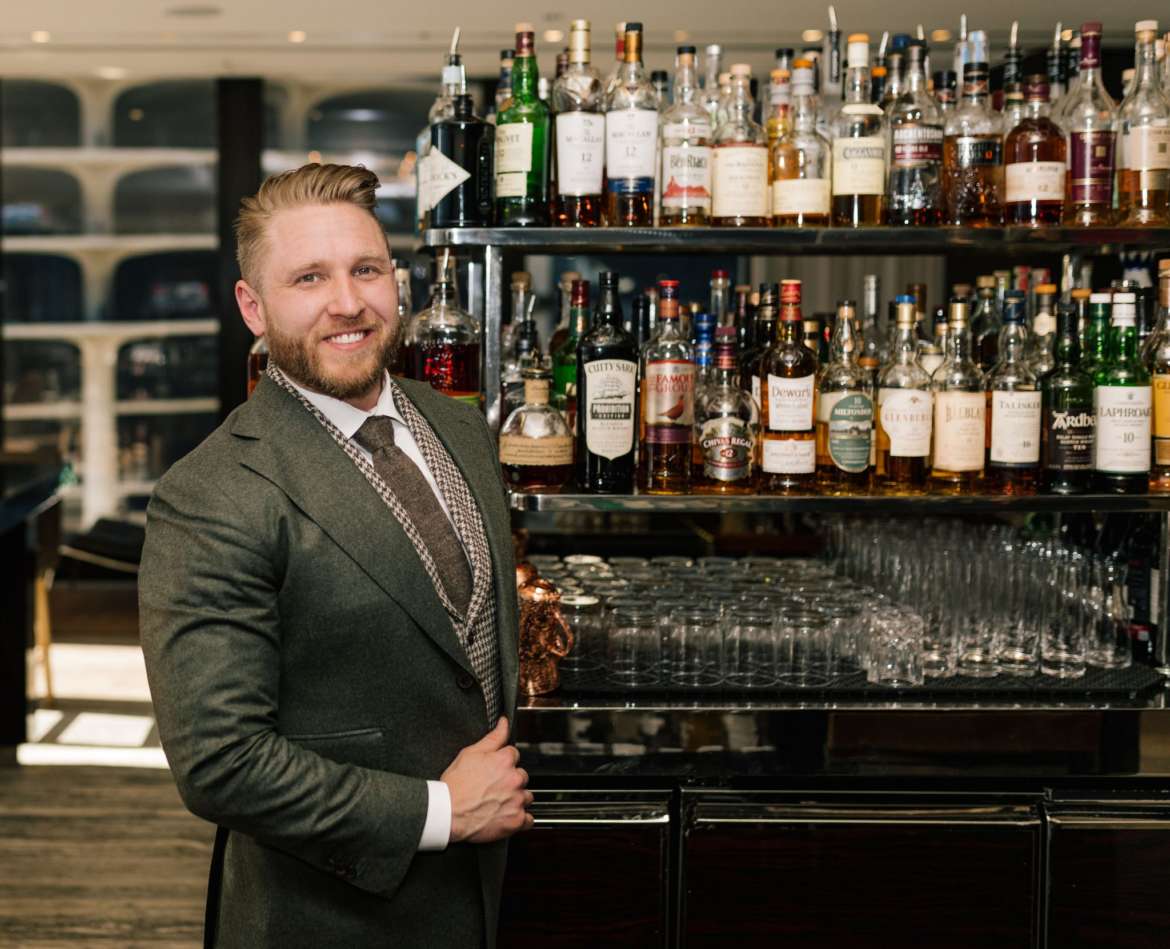 Situated on the second floor of the luxurious Langham hotel in an iconic skyscraper designed by Ludwig Mies van der Rohe — which once housed IBM regional headquarters — Travelle is located along the Chicago River in the heart of downtown. Travelle is widely known as a casually elegant restaurant, lounge, and bar featuring seasonal American cuisine. Championing fresh ingredients, its new menu unveils Chef Jeff Vucko’s classical techniques with the approachability of modern and elevated dining experiences.

On the beverage end, mixologist James Urycki has brought unique and interactive cocktail experiences to guests at Travelle at the Langham since 2015. Through a combination of creativity and innovation, Urycki seeks to re-imagine classic cocktails from the perspective of the modern man. Starting his career in the hospitality industry by working the door at a bar on Clark Street in the Wrigleyville neighborhood of Chicago, Urycki later worked as a bartender at the Pump Room, after Ian Schrager took over the historic Grand Ambassador East property and re-concepted it with Jean-Georges Vongerichten as the Executive Chef. During his time at Travelle, Urycki has participated in Chicago Cognac Week 2016 — receiving recognition through Liquor.com — and taking home a win at the Tenzing Coupe Classic for Chicago in 2018.

I had the pleasure of doing Q&A with James Urycki himself about his past, present and future as a mixologist, and what life like behind the bar at Travelle at the Langham.

How did you become a bartender?

James Urycki: I was always interested in the culinary arts from a very young age so it is no surprise that I found my way in the field of work that I did. The journey of how I got to the level at which I am at is an interesting one though. The week that I turned 21 I had come to downtown Chicago from Naperville, a west suburb, to stay with my sister. She had a friend that owned a few bars and he offered me a gig working the door a few blocks south of Wrigley Field. I began that job in January and at the beginning of the following summer, the bar that was next door was short-staffed and the manager came and asked me if I knew how to bartend, which with confidence I said, “Of course,” knowing I really had no idea. I jumped behind that bar in 2009 and the rest is history.

And how did you wind up joining the Travelle in 2015?

James Urycki: In 2015, one of the best opportunities I have ever had came along thanks to a really great friend of mine Kevin Canchola. The process of joining the team was no easy task either, it was a pretty extensive vetting. Kevin had contacted me in June of 2015 while I was at my cousin’s wedding, I can remember the day vividly. He said that there may be an opening coming up at Travelle at The Langham, where he was currently working and that he was thinking that I would be a great fit.

Now mind you, I had been bartending still at the time, but I had not worked on cocktail development or with cocktails at all since probably 2013. He said that I was really going to have to start brushing up on my cocktail knowledge and be ready to be fully immersed in the development of the cocktail program. I was so excited to hear this news, as I wanted to be part of something special for a long time and, in my mind, this was going to be it. It proved to be true. After about eight interviews over the course of two months, the new Beverage Manager at the time, Priscilla Young, offered me the position. That was a very proud moment for me and I am so grateful for that opportunity as it has completely changed my life.

Do you have a favorite item on the Travelle menu?

James Urycki: At Travelle, we just last week put out our new Spring/Summer menu, so I have a lot of favorites going on right now. Something in particular that I can think of would be the new addition of low ABV cocktails that are wine-based. There is one that, without a doubt, is my favorite. The Spanish Physician, named after Max Ernst’s painting and is part of the Art Institute of Chicago’s collection. This cocktail is a base of Tempranillo, along with PX Sherry and Amaro Sibilla, served over crushed ice. It has a rich, meaty body and wonderful undertones of leather and tobacco and I just love it.

What do you wish more people knew about life behind the bar?

James Urycki: Life behind the bar is a lot different than what I think the people who are not in our line work believe it to be. It is so much more than just pumping out cocktails to guests. There is so much coordination going on in order to deliver an amazing product over and over again. Communication is extremely important as there are so many moving parts. We use all fresh ingredients and we have about 25 house-made syrups and shrubs that are constantly needing to be refilled, especially on those extremely busy nights. Not to mention all of the fresh juices that are juiced daily.

Then you have all of the garnishes and flowers that are constantly being restocked. Once all of those things are being communicated for efficiency, you have the strategy behind the bar to make sure that we accomplish drink times and meet all 41 of our Forbes 5-Star standards. Bartending at this level is essentially multitasking level 500, it keeps you on your toes. I am so grateful of the team of people I am grinding it out with every day to make it possible.

What do you enjoy most about your job?

James Urycki: The most enjoyable part of the work that I do here at Travelle is the creative freedom that I have. The F&B team here are all really amazing people who believe in the work that we are doing. Because of that, I really get my chance to geek out and try all kinds of crazy concepts for cocktails, which lends me the opportunity to have all kinds of fun. At the end of the day, my job is extremely satisfying and enjoyable.

James Urycki: I like to spend my free time focused on self-development, something that I probably wouldn’t have ever imagined saying even five years ago. I have always been into physical fitness, but now I spend a lot of time expanding my mind and growing new skill sets. For instance, I most recently have been taking a leather-making workshop, which has been a lot of fun. I just want to keep growing as an individual so whenever I have free time I indulge in that.

James Urycki: The last concert that I went to for fun was Drake back in August, which is now a reminder to myself that I need to go have a little more fun. It was great, I had never seen him yet and it was on my list of things to do. Another accomplishment.

Finally, James, any last words for the kids?

James Urycki: We all have limitless potential. For anyone out there who is lacking direction or is thinking that is too late to start something new for themselves, don’t trust that thought. It is never too late to find something that you love to do and are passionate about. The transition to my position here at Travelle at the Langham has been that best thing to happen to me in my life. I would have never thought I would be doing the things that I am doing in such a short period of time, but I am here and am living proof that is never too late to find what it is that you love to do.