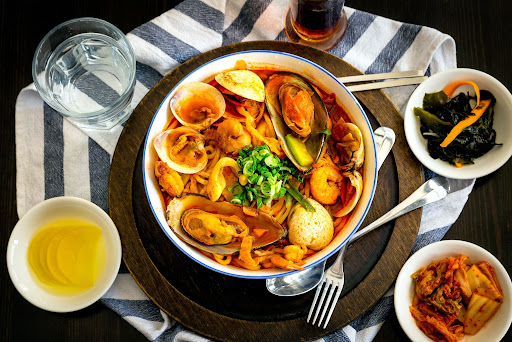 One of life’s most satisfying things to do is watching plate after plate of banchan fill up the table. Chicago offers much more than just Korean barbecue, though, as fusion spots and fancy restaurants are adding some extra flair to traditional Korean food. Therefore, we have created a list of the 8 best Korean restaurants in Chicago that will surely satisfy your banchan craving, plus so much more. Each is individual and unique, offering traditional dishes as well as fancy fusion-inspired entrees. From bibimbap and kimchi pancakes to hearty bowls of stew, there’s a lot to explore on the following menus.

The name “Ssyal” translates to “seed” in Korean. As the name implies, they wanted to be sprout as a real Korean taste in the Chicago area. Since their humble beginnings as a ginseng farm, they have proudly become a staple of authentic Korean cuisine for the past 30 years. The menu at this Korean restaurant in Chicago includes staple options such as a bowl of Ssyal’s samgye-tang, or ginseng chicken soup. An entire Cornish hen is stuffed with glutinous rice, jujubes, garlic, and ginseng root and then simmered to produce the nourishing broth. Also, it’s served with sweet brown rice and mixed greens.

For over 10 years, bopNgrill has been a Chicago staple to the fast, casual restaurant scene, bringing Korean-influenced burgers and bowls to their customers. If you are looking for delicious Korean-inspired food in Chicago, we recommend ordering the kimchi fries. They are topped with caramelized kimchi, truffle oil, cheese, bacon, scallions, and sesame seeds. But the other Korean-influenced options, such as the kimchi burger, rice bowls, and spicy pork dumplings, are highly recommended as well.

Traditional Korean plates & cocktails round out the menu at this casual hangout with a low-key vibe. Dancen is a small, somewhat claustrophobic spot that’s probably the best known of Chicago’s Korean bars simply because its food is among the best. It’s bare-bones inside, and often swelteringly hot thanks to its most pleasing aesthetic feature, a blazing open grill behind the bar that flares ceiling ward. Those gouts of flame are produced by Dancen’s claim to fame: buldak or “fire chicken,” a relatively recent dish from Korea, but one of its most painfully spicy. Here chicken marinated in chile, gochuchang, soy, and rice syrup is brought directly to the grill and flensed from its bones.

Those in the know travel to this unassuming Lincoln Square Korean restaurant for the ox bone soup. The comforting milky white broth, called seolleongtang, is teeming with noodles and choice of brisket, flank steak, tripe, tendon, and tongue. The dish can also be seasoned with salt, chopped green onions, and chili paste, and is served alongside rice and kimchi.

For the ultimate sauced chicken wings, Crisp is king. You can choose between three sauces — barbecue, a housemade marinade called Seoul Sassy, and Buffalo — are available, or, you can opt to keep them plain. The Seoul Sassy is the crowd favorite, made with soy, garlic, and ginger and tossed with crunchy scallions. By the way, the jumbo-sized wings boast a crispy exterior, and you would do well to make it a double order.

The menu is short but sweet at this Korean restaurant in Chicago. Customers can get bowls of bibimbap, mandu dumplings, japchae, kimchi, bulgogi fries, and tacos served on Indian-style paratha.

Eater Chicago’s 2019 Chef of the Year Dave Park and partner Jennifer Tran elevated Korean cuisine to new heights with the opening of their contemporary restaurant in West Town. The couple showcases Korean ingredients and flavors through intricate and refined plates.

As one of the best Korean restaurants in Chicago, Jeong constructs beautiful food and dishes like salmon tartare dressed with creme fraiche and crispy rice pearls; and seared scallop with beurre blanc sauce, spinach, trout roe, and chives.

Located in Bridgeport, Kimski is a counter service Korean Polish street food joint led by Chef Won Kim. Think smoked and fried wings in a sweet and spicy sauce, and a Polish sausage topped with soju mustard, kimchi sauerkraut (lovingly dubbed “kraut-chi”), scallions, and sesame seeds. It’s in the expansion facility of Maria’s Packaged Goods & Community Bar and you can either dine-in on the Kimski patio out front or your food will be brought to you while you have a drink at Maria’s.