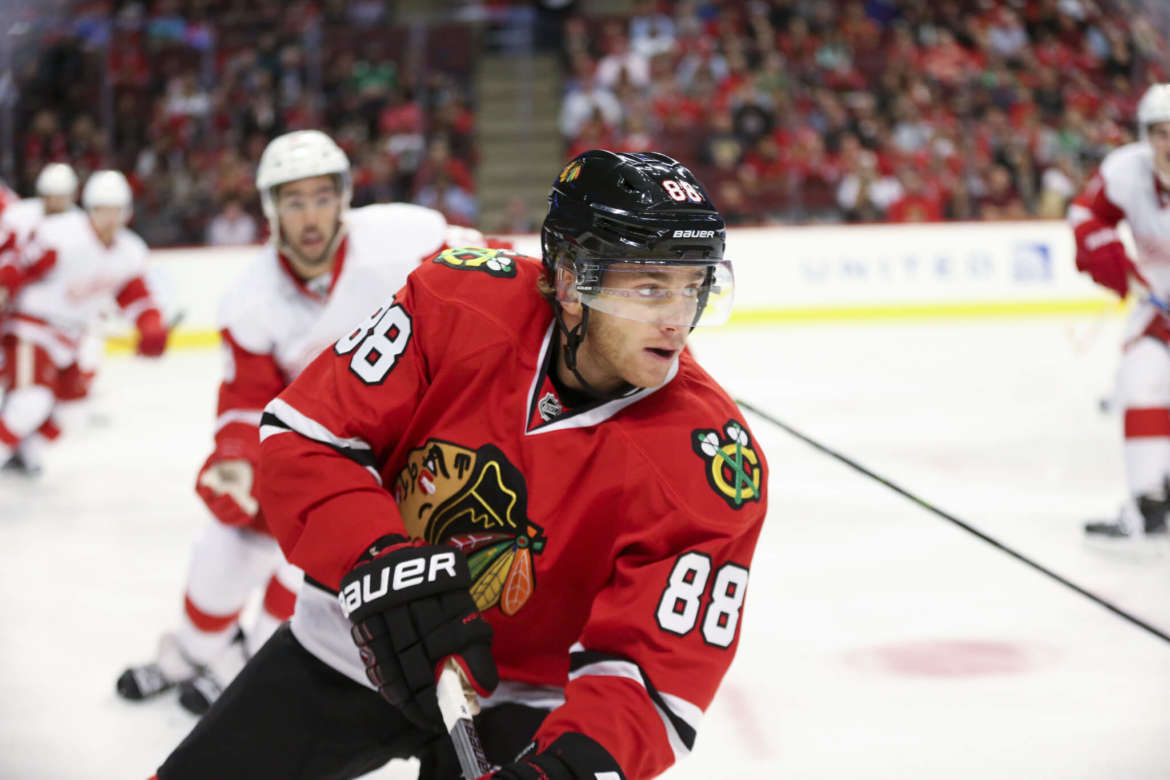 4 Blackhawks Could Be Taking Home Individual Awards This Year

The Hart, Vezina, Calder, and Jack Adams awards all seem to be in reach.

Make no mistake, anything but a Stanley Cup and this season will be considered a disappointment among Blackhawks fans. Without question, we’ve become spoiled by the amazing speed, consistency, and resiliency of the Blackhawks over the years – but they’re the favorites again, and the additions of Andrew Ladd, Tomas Fleischmann, and Dale Weise have further cemented that.

We’ve been focused on the team’s success for several seasons now, but things are a bit different this time around. Four different Blackhawks could be taking home individual awards this year.

That’s huge. Frankly, it doesn’t happen… ever. And truthfully, it probably won’t. Still, to have four organizational members even in the discussion is a feat in itself. Here’s a look at the potential winners in each category.

This one is the hockey equivalent of a slam-dunk. Kane currently sits at 89 points, a career high that he established in just 67 games this year. The dazzling winger is on another level, as he’s currently 17 points ahead of second-place Jamie Benn. Kane ranks second in both goals and assists, and if all players were to continue to produce at their current pace, he’d be the only one to top 100 points this year. Nobody else would even hit 90.

Not to take away from his tremendous rookie season, but Panarin has benefitted from a couple favorable situations this year. For one, he plays on a line with Patrick Kane, and while they’ve both undoubtedly contributed to each other’s success – other rookies have had to deal with much less skilled linemates. Panarin also dodged a bullet when Connor McDavid went down with a shoulder injury. McDavid is currently averaging 1.10 points per game, a pace second only to – you guessed it – Patrick Kane.

Still, Panarin has been downright phenomenal in his own right. The rookie is 17 points ahead of the next closest first-year player, and he currently sits in the top 10 of the NHL in total points. He’s the clear-cut favorite at this point.

This is where it starts to get murky. While Kane and Panarin are arguably running away with their awards, Crawford is battling it out with Braden Holtby and Corey Schneider for the top spot. Without making this too much about the others, Holtby leads the league in wins (and he might break the record), while Schneider is single-handedly carrying his offensively challenged team in the playoffs.

Then there’s Crawford: second with 50 games played, second in total saves, third in save percentage (.928), and first in shutouts (8). When it comes to advanced metrics, he’s just as impressive. Crow is first in the league in high danger shots against, and the Blackhawks are sixth worst in even strength goals for. He plays in the most difficult division in the league, and he’s propelled the Blackhawks to new heights this season in which their puck possession game hasn’t been up to the level of those prior.

Like we said, it’ll be a dogfight. This award will likely come down to who plays best the rest of the season, but Crawford is right there to lay stake to his claim.

Truth be told, Quenneville should be in the discussion for this award each and every year – though that’s not quite how it works. In all likelihood, Coach Q is a dark horse to win this year, as Washington’s Barry Trotz has done a tremendous job leading his team to a huge lead over the rest of the NHL. Another candidate is Gerard Gallant of the Panthers, a team that has propelled themselves into playoff contention when they weren’t expected to do much at all this year.

Still, it would be great to see Quenneville recognized as the top coach for the first time as a Blackhawk. His work in coaching the team to the top spot in the West hasn’t been easy. The current roster undoubtedly has talent, but with the departures from last year and influx of newcomers – he’s done an amazing job keeping it all together and getting the most out of everyone. If any of the above players receive an individual award this year, it’ll be because Coach Q put them in a position to succeed.

Of course, Hawks fans would readily forego all of the above-mentioned awards for a Stanley Cup. But we’ll have to wait and see what the future holds.