Did you know The Netherlands exports around half of the world’s flowers? While best known for its vibrant tulips, the country also grows roses, daffodils, and hyacinths, among others. The combination of fertile soil and cool climate allows it to bring billions of buds to all four corners of the world.

By contrast, the U.S. is the largest market for flowers, with one in five exported buds ending up in American hands. In 2017, it imported an estimated USD$ 1.74 billion worth of flowers. Any flower exporter has to make the incredible journey across the Atlantic, all while staying fresh.

That’s why every shipment of flowers overseas is a struggle for growers. They work around these issues by cutting flowers while they’re still buds, storing them at or close to freezing temperatures, and keeping them watered throughout the journey. Even then, something can still go wrong. If you want your flowers as fresh as possible, your best bet is to buy from growers close to home. Homegrown flowers may not be a major export, but they’re less likely to degrade in appearance if shipping only takes days, if not hours. Apart from staying fresh, here are other reasons to buy local.

About three-quarters of the domestic supply of flowers comes from California. It’s no Netherlands in terms of soil and climate for sure, but it has a vast array of unique species. Petunias, for instance, are renowned for their year-round growth and resilience to the state’s Mediterranean-like climate. You most likely won’t see an off-season with petunias, though they’re still vulnerable to frost.

Buying flowers that can withstand the local climate warrants buying from local growers and stores. They know how to grow and care for these flowers more than those who don’t experience the same weather. Plus, you don’t have to pay extra for tariffs and such from international trade.

You’ll be doing the thousands of growers and retail florists across the U.S. a huge favor, especially given the current state of the floral market. When the COVID pandemic got stateside last year, the industry suffered a drastic drop in sales, as much as 85% in California alone. They’re still reeling from the shock, so every penny of support you give them by buying locally helps. 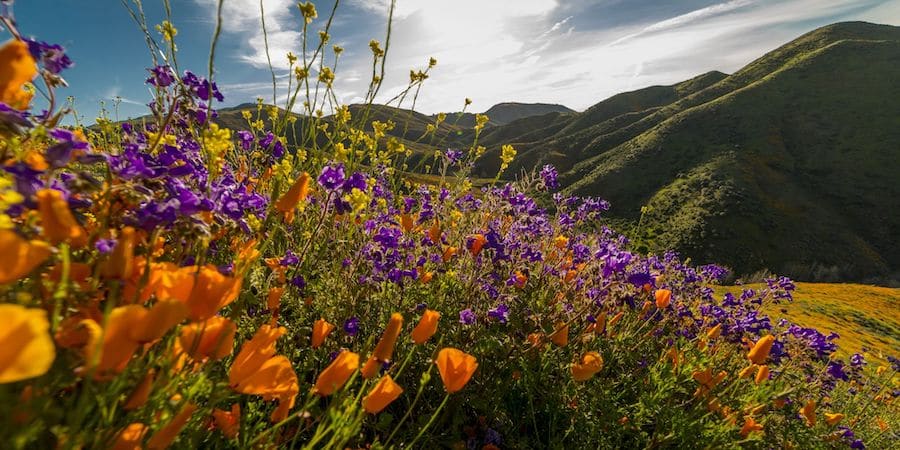 Aside from local growers and retailers, buying local flowers also does Mother Nature a huge favor. Think about it: the farther your flowers have to travel to get to you, the more fuel its transportation has to consume. That’s not exactly sustainable.

Say you want to order cut tulips from The Netherlands, meaning those flowers have to make a trip of more or less 4,000 miles. Assuming they’ll be coming in via a container ship, it’ll take between 10 and 20 days to cross the Atlantic. At full speed (23 to 28 mph), the ship will use an estimated 63,000 gallons of fuel a day.

Planes are faster, but their fuel consumption still leaves much to be desired. From Amsterdam, it’s a 5,400-mile flight to San Francisco, and a plane can burn around five gallons per mile. Your tulips will have to use 27,000 gallons for the 11-hour flight.

Buying local is one of the best ways to save the environment. A small cargo truck is usually enough to maintain a steady local supply chain, covering as much as 10 miles on a gallon. Even if it must travel from one end of California to the other, a truck will use up 104 gallons of fuel at most. And your flowers get to you in no time.

It’s happened to everyone: you realize that it’ll be a loved one’s birthday or anniversary tomorrow and you haven’t picked a present. Or even if you’ve already picked one, a bouquet, for example, it won’t arrive on time since it’s still crossing the Atlantic.

This is where buying local shines the most. Local florists aren’t that far from the nearest suppliers, putting them in a better position to satisfy last-minute orders. Your special someone doesn’t have to know that you almost forgot their special day (unless you tell them). For future reference, make a habit of remembering and preparing ahead of time.

There may be plenty of beautiful flowers in other parts of the world, but the U.S. has its fair share of such. Don’t be too quick to dismiss them, as they can be more than just a lovely present. Buying local flowers can contribute wonders to the community.