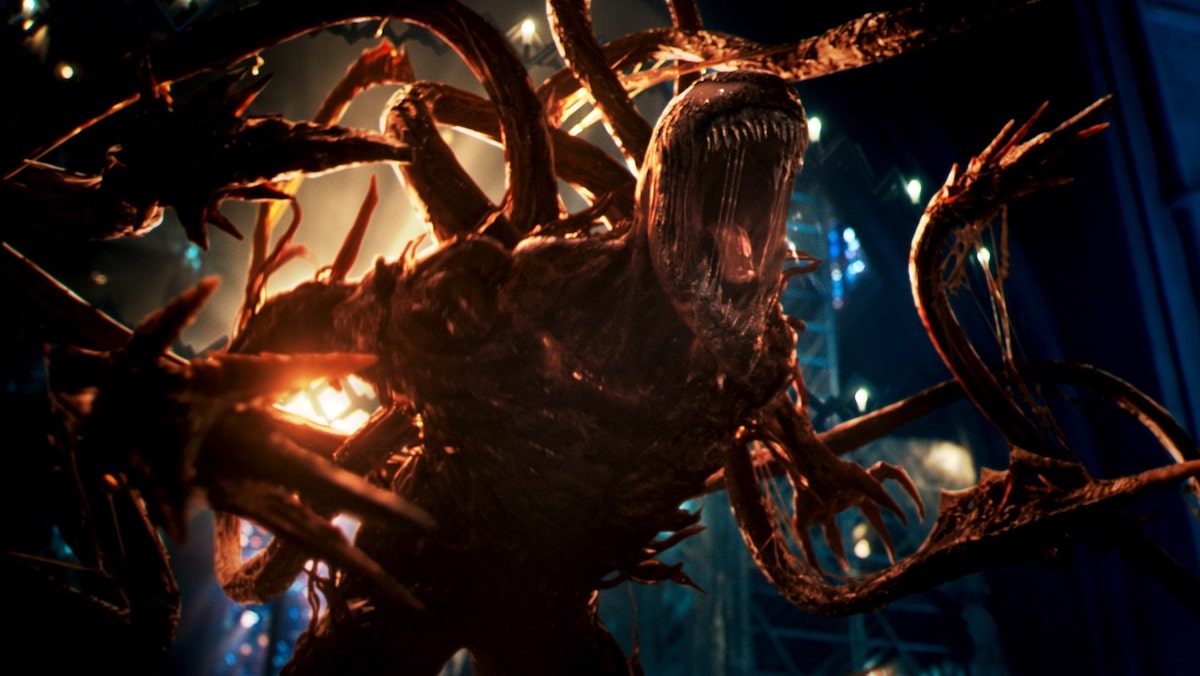 While it wasn’t going to be difficult to improve on 2018’s Venom, a major name at director and a terrifying premise that was teased in the first film, Venom: Let There Be Carnage manages to do just that thanks in large part by cranking up the humor between Eddie Brock and Venom, quick pacing and a truly horrifying symbiote.

The hype was real leading up to this film and the biggest reason was the inclusion of Carnage, a villainous symbiote with host Cletus Kasady who also happens to be a prolific serial killer but oddly enough, there is a notable lack of real scenes with Carnage or scenes that include Carnage and Venom interacting with each other. This would sort of be like watching The Dark Knight if there were no scenes with Heath Ledger and Christian Bale together on-screen. While Carnage is terrifying to watch as he quickly dispatches prison guards and hapless civilians but Cletus Kasady doesn’t offer the same quality. Woody Harrelson finds a way to overact during his performance and Kasady leads something to be desired throughout the course of the film.

While it’s appreciated to see Eddie struggle with Venom’s growing hunger and bipolar like personality, the film doesn’t exactly tread new ground in terms of character growth; Eddie and Anne don’t get back together, Carnage is defeated and Eddie is forced to go into hiding following his outing as the symbiotic anti-hero. There is a period of time during the film’s second act where Venom and Eddie split and Venom goes off on his own adventures but leaves behind a lot of collateral damage as those who aren’t symbiotic with Venom die as he leaves their body.

PLEASE BE ADVISED THAT THIS PORTION WILL CONTAIN SPOILERS FOR VENOM: LET THERE BE CARNAGE. While the film unfolds in a familiar way, what was wholly unexpected was the inclusion of a mid-credits scene that shows Eddie and Venom relaxing on a beach in some tropical land when Venom reveals that he has knowledge that would blow Eddie’s mind and almost on a dare, Venom shows off his true capability and manages to access the Multiverse. While Venom accesses the Multiverse, a television is turned on showing Peter Parker’s face and the ending from Spider-Man: Far From Home is being shown as Spider-Man’s secret identity is exposed thanks to J. Jonah Jameson and Venom eagerly licks the screen to potentially set up an appearance or some type of crossover event with the Marvel Cinematic Universe. While it’s been no secret that Sony wishes to create their own shared universe of Spider-Man ancillary characters, this scene could potentially have huge ramifications for not only future Venom films but could set up an appearance in Spider-Man: No Way Home.