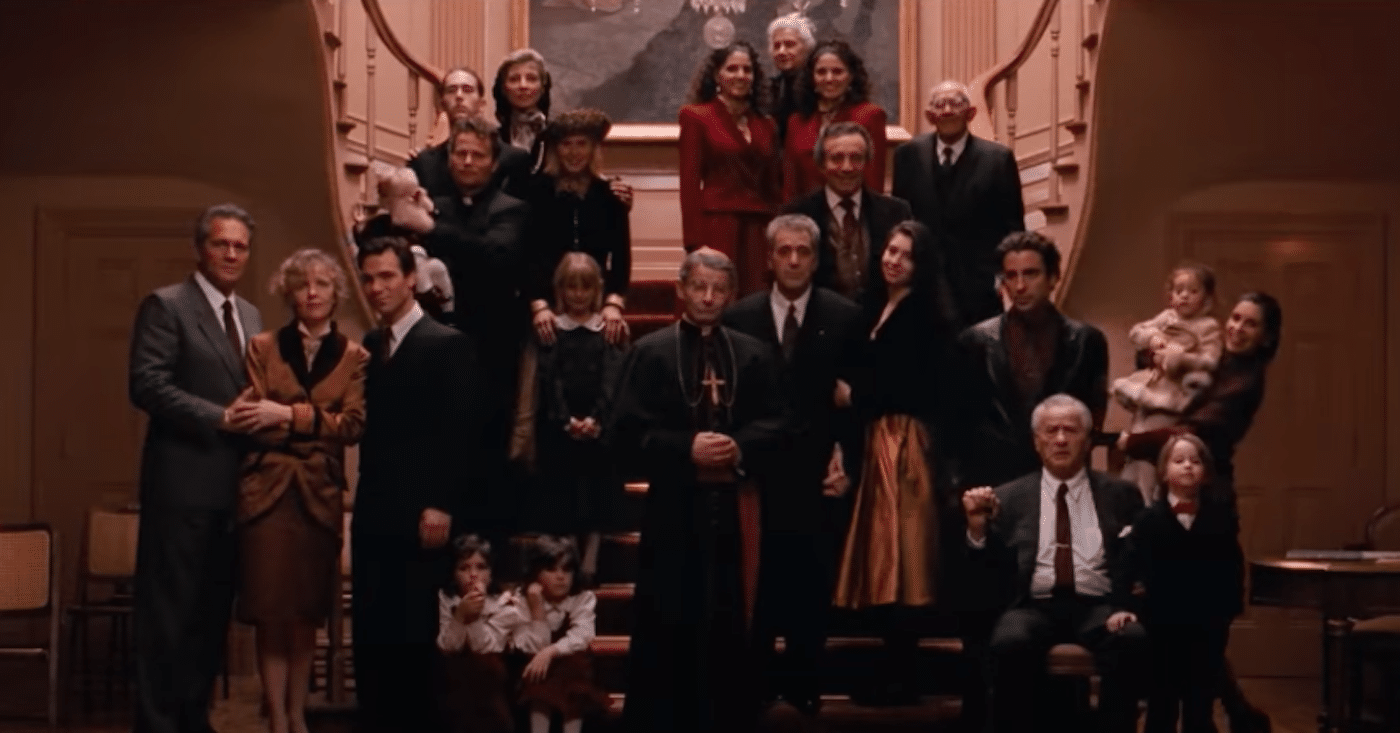 The legacy and impact of The Godfather cannot be overstated. It is a classic story of the rise and fall of a criminal family featuring amazing performances from some of cinema’s most legendary icons and The Godfather Part II somehow managed to top the first film. It is unequivocally the best sequel ever made and is also bolstered by featuring familiar characters but even better performances. Then, The Godfather Part III was released. While the last film in the series doesn’t taint the legacy of the first two, a confusing plot and the casting of Sofia Coppola that reeks of nepotism help to sink the now infamous film. Recently, Francis Ford Coppola announced that a new cut of Part III was in the works so I spent the better part of a full day watching not only the first film but Part II and ending it on the newly released The Godfather Coda: The Death of Michael Corleone to see if it was possible to redeem the final entry of the Godfather saga.

It’s important to understand some context for Part III, the original films that preceded it and the year it was released. For starters, Part III is not a bad movie but that doesn’t mean it’s aged well. The cinematography and overall look of the film make it seem like it was made in the 1950’s for a film set in the 1970’s and like its predecessors, it has a slow burn of a plot but it’s heavily convoluted and nothing seems to fall into place until early on in the second act. In addition, Sofia Coppola’s performance as Mary Corleone was widely panned and obvious that her cinematic talents lay elsewhere. I know individuals who admitted to never having seen Part III simply because it has a reputation as being a “bad” film and while it is hard to defend it, I can’t condemn it as well. The original idea for the film was fundamentally flawed as Francis Ford Coppola only took on directing and screenwriting duties for Part III after landing in dire financial straits following the flop of a film he had directed in 1982. Paramount Pictures had a long-standing offer to Coppola to make a third film if he desired to do so and while he had originally envisioned a third film being an epilogue for the first two films, the studio pushed back on this proposition and pressured Coppola into making the film look and feel more in-line with the first two. In short, the studio wanted a more traditional gangster film as the formula had been working. Part III was released in 1990 at a time when films were changing and some of the big releases from that year include Ghost, Home Alone, Dances with Wolves, and a little gangster film called Goodfellas. Martin Scorsese’s mafia magnum opus completely changed how we view gangster films with its fast pace, faster dialogue, and unsympathetic characters; this leap forward in the genre made Godfather Part III seem old fashioned. While both films came away empty-handed at the Oscars (Joe Pesci would win for Best Supporting Actor for his chilling portrayal as Tommy in Goodfellas) but if a film is nominated for Best Picture then it can’t be all bad. Right?

After the less than stellar reception to Part III, Coppola desired to make a fourth Godfather film with screenwriter and author of the original novels, Mario Puzo, but Puzo had passed away before this vision could be realized. The project was eventually canceled but this fourth film would have followed a similar narrative pattern to Part II with Robert DeNiro reprising his role as Vito Corleone and Leonardo DiCaprio playing a young Sonny Corleone as the Corleone family rises to prominence in the New York underworld. The film would then flash forward to the 1980’s as Vincent Corleone, unable to cope with the loss of Mary in the third film, plunges the Corleone Family into a long and destructive war with the other mafia families. Speculation persists as to how this project was conceived in the first place but it is an interesting concept as the years omitted from the first two films is compelling and some critics arguing the flashback sequences in Part II as one of the main strengths of the film. While the reliance on flashbacks can be distracting in constructing a narrative, exploring how Vito rose to Don, his continued struggles to be a good father, and the emergence of Sonny and Vito’s other children into the crime family could have been great on-screen drama. This desire to continue the Godfather saga and resolve the story is possibly what led Coppola to approach Paramount with an idea to recut and re-release Godfather Part III.

Enter now, The Godfather Coda: The Death of Michael Corleone. While this isn’t a completely different film like the abominations George Lucas created with “updated” Star Wars films, it’s best to think of Coda as more of a modernized version and truer to Coppola’s original dream of creating an epilogue to the story of Michael Corleone. The most notable change to the film is made to the first 30 minutes as the film opens with Michael meeting with Archbishop Gilday, the head of the Vatican Bank to propose an infusion of cash in order for Michael to gain control of a large European real estate holding corporation. Having the film start with this meeting makes the reasons for the ensuing party much clearer and it serves to introduce the character of Vincent much earlier than in the original cut. While these changes differ significantly from the original cut, it helps to establish Michael’s desire to make his organization legitimate as opposed to us learning of it in the second act. Introducing Vincent early on in the film helps to establish him as Michael’s protégé as we learn of his lineage and connection to the family. Similar to the layout of the first two films, the major characters are introduced right away and the events are foreshadowed immediately. Perhaps intentionally, several scenes featuring Sofia Coppola have been shortened in order to limit her impact on the film. Her relationship with Vincent is cringe-inducing and isn’t the most important as it’s more important for Michael to repair his relationship with his estranged ex-wife than it is for us to see two cousins have a sexual encounter in a dirty nightclub kitchen. The ending is slightly changed as well as the film ends with Michael putting on a pair of sunglasses as the film fades to black with a cryptic title card saying “a Sicilian never forgets”. This is possibly in reference to the regret Michael now has to deal with alone or the fact that Sicilians, at least as they are portrayed in these films, will pursue vengeance. It’s a tad confusing and an odd way to end the film and while I would’ve just ended the film on that fade to black, I realized that I’m not Francis Ford Coppola.

While the Coda isn’t a complete redo, it helps to make sense of the original plot and brings Coppola’s true vision to the screen while mildly redeeming Part III. Coppola now joins the ranks of other directors who have released a director’s cut. Terry Gilliam had a very public feud with Universal Pictures regarding the release of the dystopian cult classic Brazil. Ridley Scott’s sci-fi classic Blade Runner, received two low-quality cuts before Scott stepped in to release a “definitive” cut in 2007. The cuts for Blade Runner are infamous as it made viewing the film’s sequel, 2049, confusing as that sequel is based on plot points only seen in the 2007 definitive cut. When The Shining was released in 1980, Stanley Kubrick had every copy pulled from theaters just to rework the final TWO minutes of the film. The original Superman films were plagued by mismatched plots following the departure of director Richard Donner but these issues were seemingly corrected in 2006 with the release of the “Donner Cut” of the first two films. In the past several years, you may have seen a trending topic that can be easily summed with the hashtag “Release the Snyder Cut” which is in reference to the maligned release of Justice League in 2017. While the film was meant to serve as the culmination of the DC Extended Universe, it effectively sank those plans as the film’s original director, Zac Snyder, left the project following the death of his daughter and Joss Whedon stepped in to fill the director’s chair. This led to the majority of the film being reshot and many of the plot points Snyder envisioned being rejected while also causing the film’s budget to balloon and made it impossible for the film to make any sort of profit at the box office. Following this growing Internet movement, Warner Brothers brought Snyder back to finish his original vision and we will be treated to that vision with Zac Snyder’s Justice League over the course of 4 hours in 2021.

I will admit, the Godfather Coda isn’t a necessary component of the overall Godfather experience. The story of Michael Corleone effectively ends in Part II as Michael sits alone without his wife and children and having to live with the fact that he ordered the murder of his only remaining brother. Michael achieves no sort of redemption in Coda as his daughter is still murdered as punishment for his crimes. While Coda won’t completely absolve Part III of its shortcomings, I found it to be an improvement of the original cut, an enjoyable experience, and a fitting epilogue to one of the best cinematic sagas.

The Godfather Coda: The Death of Michael Corleone is directed by Francis Ford Coppola and stars Al Pacino, Diane Keaton, Andy Garcia, Talia Shire, Sofia Coppola, and Eli Wallach and is available now on digital on-demand and Blu-Ray, and be sure to check out Chris’s latest year in review film series.

4 Ways To Unwind At The End Of A Work Day