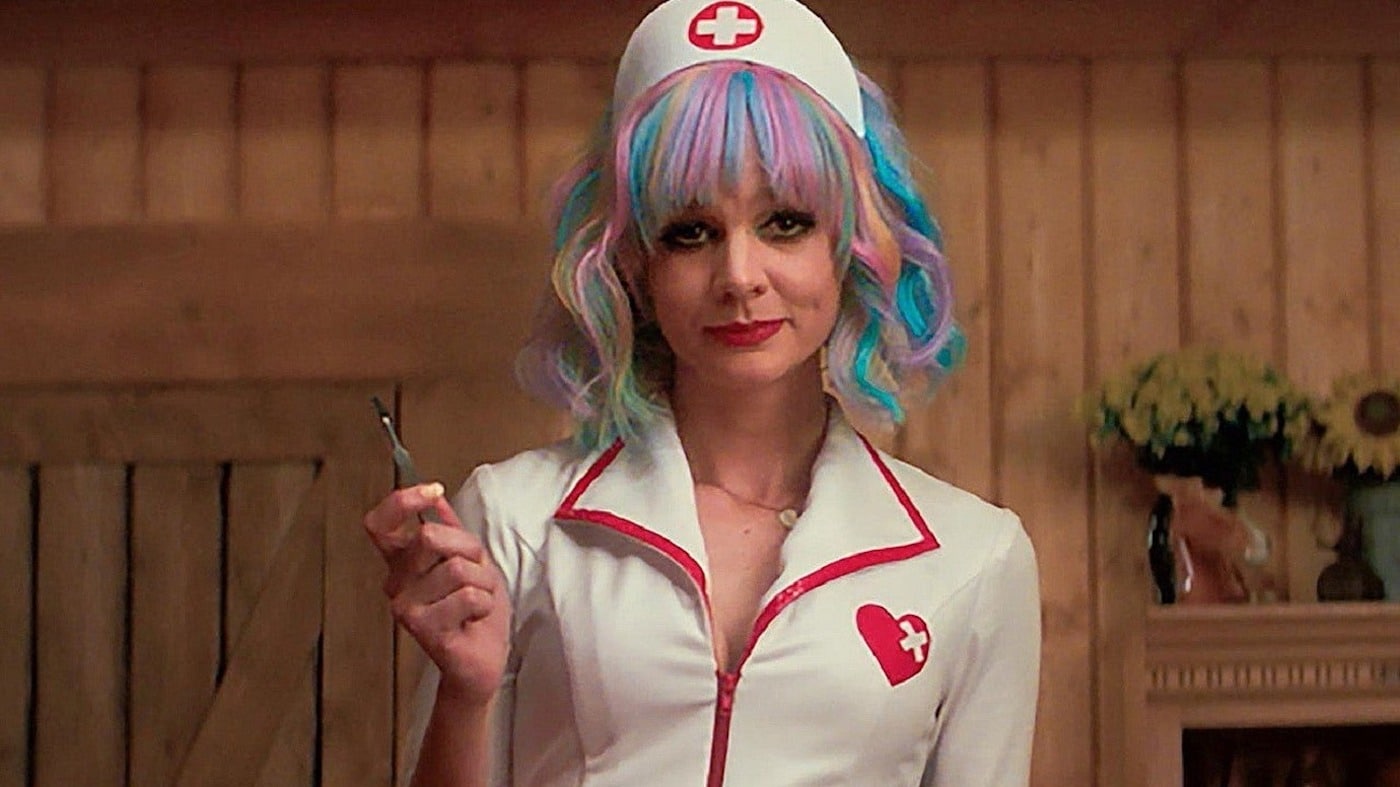 In recent years, the revenge film has become a lost art. Recent entries like Peppermint or The Rhythm Section has been disappointing both critically and commercially and the sub-genre seems reserved to Westerns or some type of Punisher type rip-off. The recent release of Promising Young Woman elevates the revenge film to new heights by setting it in a time where the Me Too Movement has brought new awareness to sexual assault and a reckoning to those who abuse their position as well as placing Carey Mulligan in the role of a protagonist with a sense of cunning never before seen from a revenge protagonist.

PLEASE BE ADVISED THIS MOVIE REVIEW WILL CONTAIN SPOILERS. IF YOU WISH FOR YOUR EXPERIENCE TO BE SPOILER FREE, STOP READING HERE.

Every guy wants to believe they’re a nice guy. It seems to be an eternal struggle of the human condition to search for the good in everyone. However, that is an exhausting struggle and in today’s world, we seem to receive a daily education as to the new depths humanity will sink and the beginning of the Me Too Movement destroyed the notion of the nice man along the trial of one Brock Turner. In January 2015, Stanford student Brock Turner, was arrested and charged with raping an unconscious woman at a university party. At his sentencing, Turner was found guilty and in spite of prosecutor’s recommendation of a six year sentence, the judge in the case gave him six months in jail and three years of probation. During this sentencing, the judge referred to Turner as a “promising young man”, seemingly ignoring the severity of his crime and no mention to the woman who Turner had viciously assaulted. It’s this system, both of the perpetrators and those who enable those individuals, which Promising Young Woman attacks head on.

In Promising Young Woman, Carey Mulligan plays Cassie, a woman whose life was derailed after her best friend was assaulted while they were attending college together. The system they had trusted to protect them had abandoned them and no one was brought to justice for the crime that sent her friend into a tailspin. This movie takes great care not to specifically mention the word “rape” but rather leaves it to the audience to fill in the gaps as to what happened to Cassie’s friend, Nina. The events of this assault were so traumatic to young Nina that she ultimately took her own life. This is also not explicitly mentioned but after following Cassie’s journey through the movie, we can infer that Nina’s struggles became too overwhelming.

Cassie begins her journey of revenge in Promising Young Woman by almost indiscriminately luring a guy into thinking she’s drunk at a bar, getting picked up by them, taken back to their place and as the guy thinks he’s about to get lucky with a hot drunk chick, she turns the tables and lays bare their inadequacies and failings as human beings. In the opening prologue of the movie, this exact scenario plays out with Jerry, a business executive on the town with his coworkers when he sees Cassie struggling to keep her head up and as Jerry goes through his awful procedure of preparing to assault her, she reveals to be faking her drunkenness and asks Jerry very pointedly “What are you doing?.” It’s a scene that sets a tone of revenge for the rest of the movie. In her next encounter, she goes home with writer/musician/coke fiend/douchebag Neil and confronts him on his phrases on “We had a connection” and “I’m a nice guy”. Every guy wants to buy into their own mythology and believe they are a nice guy but everyone has skeletons in their closet and all Cassie wants to do is bring them to the light.

Cassie’s revenge is cold, calculating and precise to the point that her interactions become hair raising. We also begin to see that her plan isn’t just limited to the males as the first two parts of her plan involve going after ladies in particular, those who she trusted to help and assist her following Nina’s assault. She meets with Madison, another young woman who went to school with Cassie and initially ignored her pleas for help and didn’t believe the allegations they had presented. After getting her drunk during what seems to be a casual lunch, Cassie offers her up on a silver platter to a man with ill intentions and Madison wakes up alone in a hotel room, unsure if she was assaulted or not and we see Cassie almost gleefully ignoring Madison’s pleas for help in Promising Young Woman.

In addition, Cassie goes to see her former Dean at college and after confronting her that she didn’t do enough to help Nina and go after her attackers, she leaves feeling ready to continue going after the system that failed her friend. She later visits the lawyer who represented Al Monroe, Nina’s rapist, but after seeing that he has become a broken down shell of a man, she accepts his apology and hopes that he will use his newfound regret for good. This man has felt the weight of the entirety of his bad deeds and now wants to either make amends or find a way to relieve the weight and receiving forgiveness from Cassie is the first step.

This act of forgiveness and her willingness to move on from her odd crusade, allows Cassie to connect with an old classmate, Ryan, who has gone on to become a pediatric surgeon and they begin to date and at one point, confess their love of one another. This portion of the film feels natural and one of the most mature decisions Cassie makes; to move on from the trauma that she allowed to define her life and let someone in. Like every budding relationship, it’s full of sweet moments from an awkward dinner date with Cassie’s parents, dancing to a Paris Hilton song in a pharmacy and saying sweet nothings to each other in bed. For the majority of the film, Ryan has been set up as the film’s only nice guy; he’s an accomplished surgeon, he’s well-liked and he’s funny but this image comes crashing down when Madison returns to Cassie and shows her a video of Nina’s assault that includes Ryan, not as a participant but as a bystander to this horrific event who does nothing to stop it. This video and betrayal reignite Cassie’s desire for revenge against those who wronged her friend.

After getting the location of Al Monroe’s bachelor party, Cassie arrives posing as a stripper and begins to wear down the defenses of the entire party. She fills them with alcohol, removes Al from the party, handcuffs him to a bed and in the most intense showdown of the entire film, confronts Al on what he did to Nina and we are forced to hear his justifications on getting away from it; “I was a kid”, “I was drunk”, “It was a party” are all part of his defense and it’s sickening to hear someone who got away with a horrible crime like rape and who seems to have his entire life going well while ignoring the destruction he wrought on the way there, try to write off what he did simply because he was drunk or lacked the emotional maturity to realize the gravity of his actions. However, Cassie’s plan to carve Nina’s name into Al goes awry as he gets loose from his handcuffs and in a fit of fear, smothers Cassie and kills her. The next morning, her body is found by the best man and in the most chilling of exchanges, he provides Al with what to say to the police and almost justifies his act of murder and in one final cruel act, they conspire to dispose of Cassie’s body by burning it. While it seems like the film could have ended after the death of Cassie, her parents file a Missing Persons report and the police begin to interrogate those closest to her and in the final part of her plan, Cassie enlists the help of Al’s former lawyer into releasing the video of Nina’s assault as well as her last known location and as the police find her burned corpse, she sends a final message to Ryan telling him that her plan is complete and to enjoy the wedding.

It’s unclear if dying was part of Cassie’s grand plan but even if it were, revenge stories rarely end with everyone alive. As Confucius once said “Before you embark on a journey of revenge, dig two graves” meaning one grave for your victim and one for yourself. While Cassie wasn’t able to get justice for Nina, she was able to get revenge for her own murder and even in death, manages to retain the power in the film. She’s a devoted friend and if there’s anything to take away from Promising Young Woman, it’s about the bonds of friendship and the lengths that one will go to see justice delivered where it’s deserved.

VERDICT: 4.5 out of 5 revenge notebooks

For more film reviews from Chris Rupp, check out here.