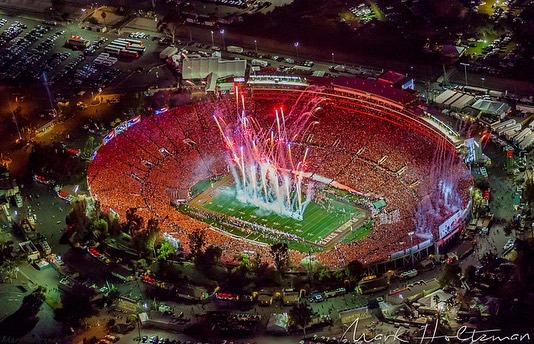 15 Oldest Stadiums In The United States

Sports are such a large part of the American culture. Whether it’s college or the pros, almost everyone has a favorite league, team, or player they love watching on game day. While many typically watch from the couch at home, almost every sport is best watched live from the stands. Nothing beats cheering on your favorite team and the stadium atmosphere that comes with it. In the United States, we have some of the most fascinating and oldest stadiums in the world. You may not be able to visit them now, but once sports reopen their doors to fans, you’ll definitely want to check out these historic stadiums.

Home to the Los Angeles Dodgers, Dodger Stadium is the oldest MLB stadium west of the Mississippi River. While it’s not the oldest in the league, it still manages to find itself packed with fans 58 years after it’s construction. That’s no surprise though as the Dodgers are one of baseball’s best teams.

The #Packers are now offering abbreviated field viewing tours to allow visitors the opportunity to see the inside of the Lambeau Field bowl. (Via @packershof)

When it comes to historic stadiums, Lambeau Field is definitely a crowd favorite. Located in Green Bay, Wisconsin, this stadium can fit over 81,000 Packers fans at once. That sure is a lot of cheeseheads.

They say there's nothing like Playoff Lambeau. But we can't wait to see Irish Lambeau on October 3, 2020. #ShamrockSeries #GoIrish

Up next is Notre Dame Stadium which is home to none other than the Fighting Irish of Notre Dame. This coliseum styled arena is one of the most recognized stadiums not only in college football but in the world too.

The next of our oldest stadiums in the United States also hails from the world of college football. Bryant-Denny Stadium has been home to the Alabama Crimson Tide since it was built in 1929. Not many other stadiums on this list have hosted such dominant teams.

Home to no one other than the Monsters of the Midway, Soldier Field is our next historic stadium. While the Chicago Bears didn’t play home games here until 1971, the stadium still retains the original Greek columns that were built nearly a century ago.

Happy #EarthDay2020! Today and every day we celebrate the beautiful Arroyo Seco that surrounds us and is enjoying a breather during this time.

Located in Pasadena, California, the Rose Bowl Stadium celebrates its 98th birthday this October. Fun fact: Up until 1928 the Rose Bowl was the shape of a horseshoe. It took six years after construction finished for the south stands to be built.

Camp Randall just hits different at night Can't wait to open the season on Sept. 4 against the Hoosiers Link in the bio!

Our first stadium over 100 years old on this list is Camp Randall Stadium. The Wisconsin Badgers have called this place their home ever since their opening day victory against Minnesota on November 3, 1917.

This next college football stadium to pass the century mark finds its place in the Ivy League. When it first opened, the Yale Bowl was the largest stadium in the world and the first to ever come with seating that enclosed the field!

Wrigley Field is the second oldest baseball field in the MLB. Home to the 2016 World Series Championship winning Chicago Cubs, this stadium is one of the best with its Ivy wall. The most loyal of fans are even able to watch games from nearby buildings.

The oldest Major League Baseball stadium on this list is the 108-year-old Fenway Park. The Boston Red Sox don’t plan to leave anytime soon as it’s said to be usable until at least 2061.

#IMSWantsToKnow: Which #Indy500 presented by @gainbridgelife did you attend that you’re most thankful for?

A post shared by Indianapolis Motor Speedway (@indianapolismotorspeedway) on Nov 29, 2019 at 6:48am PST

One of the only and oldest stadiums not related to football and baseball on this list is the Indianapolis Motor Speedway. Sitting on an area of 560 acres, the racetrack has the capacity to hold nearly 400,000 people in all.

The @sec has announced that we will play a 10-game, conference-only schedule beginning Sept. 26. Game dates & stadium capacity information still to come. LINK IN BIO. #gigem

Kyle Field, home of the Texas A&M Aggies, has been standing since 1904. It wouldn’t take too long for the school to win it’s first National Championship only 15 years later in their 1919 season.

The second Ivy League football stadium on this list is home to no school other than Harvard. Harvard Stadium has even managed to see some NFL action, as the stadium was the host site for the New England Patriots 1971 and 1972.

Share with us your favorite memory from Franklin Field #FightOnPenn #JoinTheUPRising 🔴🔵

Franklin Field at the University of Pennsylvania is the oldest football stadium in the U.S. It was even the place where the first game was broadcasted on radio in 1922.

Check Out These Historic Speakeasies Still Standing in America

Want to learn more about other pieces of American history? Check out these historic speakeasies still standing in America.

Check Out These Historic Speakeasies Still Standing in America

Taking the top spot of the oldest stadiums in the United States is Churchill Downs. With a capacity of 170,000, this historic icon will look to celebrate its 150th birthday in just five years

Hunting Down Blackbeard’s Treasure Hidden Around the United States